In a discussion that brings together academia and activism, we reflect upon how gender, race and class relate to the climate crisis and environmental destruction, and on how colonial continuities manifest in both the climate movement and mainstream environmental discourses. These different types of violence cannot be seen in isolation, intersectional issues require an intersectional response. How is neo-colonial extractivism and patriarchy challenged by the groups it invisibilises? Can degrowth align with decolonial, intersectional climate movements and support powerful inclusive narratives? 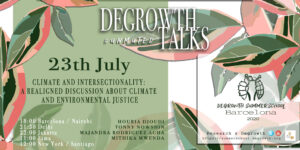 Dr. Houria Djoudi is Senior Scientist at the Center for International Forestry Research (CIFOR) in Bogor, Indonesia, since 2011. There she focused on the climate change adaptation, vulnerability analysis food security particularly applied to the context of drylands.Houria’s work focus in socio-ecological systems analysis particularly linking environmental and institutional changes and policy processes, including multi-scale dynamics. She was researching human and ecosystem interaction in different socio-ecological systems in North and West Africa and Central Asia, like in in Mali, Burkina Faso or Algeria. Houria’s work has a strong focus on the gendered dimensions of natural resources management and the questions of equity access and rights. 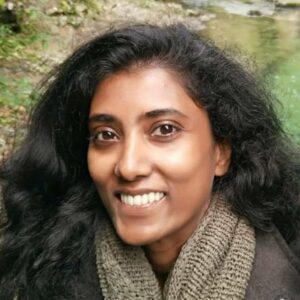 Tonny Nowshin grew up in Dhaka, Bangladesh and was deeply moved by the IPCC reports while writing her master’s thesis. Realizing the urgency to focus our efforts on climate change mitigation she became active in the climate movement. She has six years of work experience in International NGOs like ActionAid, BRAC and 350.org. Tonny has a specialization in International and Development Economics. She mainly works as a researcher for the Global Coal Exit List and actively supports the energy and coal campaign team in various matters. Sheis also a Climate Justice and Degrowth activist, so very often she attends  various climate camps, organizing events and giving talks, workshops or webinars online.

Maria Alejandra (Majandra) Rodriguez Acha is a climate justice and queer feminist activist from Peru, based in Lima. She studied Sociology/Anthropology and Sustainable Development Studies in the US. Majandra has worked as a project co-coordinator, educator and facilitator focusing on issues of gender, intersectionality, capitalism, activism and the environment. Majandra is co-founder of TierrActiva Perú, a collective and national network working towards “system change for buen vivir” and the building of alternatives centering justice, care and the sustainability of life in the face of the climate and environmental crisis.She is currently a member of the Next Generation Climate Board at Global Greengrants Fund, and a member of the Diversity, Equity and Inclusion Working Group at Greengrants.

Mithika Mwenda is the Kenyan-born Executive

Director of  Pan African Climate Justice Alliance. Hehas been climate advocate for over 10 years. Mithika is now pursuing his PhD with the University of Witwatersrand, South Africa, where his area of research is climate justice and its meaning for African people. Dr. Mwenda is working to strengthen stakeholder collaboration, with this resulting into the establishment of African Coalition for Sustainable Energy and Access (ACSEA), to promote shift to renewable energy, and particularly ensure the African Renewable Energy Initiative (AREI) delivers energy to poor communities. In 2019, Dr. Mwenda was named by Apolitical as one of the most influential people in the world on climate policy. In addition, Sierra Club, the largest environmental conservation movement in the United States, nominated him for their most prestigious Earthcare Award, in recognition of his contribution to environmental conservation and protection.